I emailed the Claire Byrne Live programme this evening. They cannot say they did not know.

I understand that tonight’s Claire Byrne Live (Monday, 9th January 2017) is to include Nicholas Pell among the speakers on the programme. Presumably, this will relate to a discussion on far-right extremism or similar.

I am urgently calling on the Claire Byrne Live team not to run with this item. As broadcasters, you have an ethical, moral and legal duty not to engage in such dangerous acts.

The right to freedom of expression is not absolute. It is limited. These restrictions are found in international treaties, such as the ICCPR and ECHR, and were included as a direct response to the events which led to the violent atrocities of the Second World War. Per ICCPR Article 19:

The exercise of the rights provided for in […] this article carries with it special duties and responsibilities. It may therefore be subject to certain restrictions, but these shall only be such as are provided by law and are necessary:

(a) For respect of the rights or reputations of others;
(b) For the protection of national security or of public order (ordre public), or of public health or morals.

These principles inform the Prohibition on Incitement to Hatred Act, 1989, as well as the provisions of the Criminal Justice (Victims of Crime) Bill 2016. And they are found in the Broadcasting Act 2009, Section 39(1)(d):

(d) anything which may reasonably be regarded as causing harm or offence, or as being likely to promote, or incite to, crime or as tending to undermine the authority of the State, is not broadcast by the broadcaster

Mr Pell is an avowed far-right extremist. This is publicly known, and he does not deny it. These are precisely the circumstances envisaged by the drafters of the exemptions to freedom of expression in the aftermath of World War II.

As Franz Frison, an Irish survivor of Holocaust, wrote in a letter to The Irish Times on 12 December 1988:

Having experienced fascism in the flesh […] If fascism could be defeated in debate, I assure you that it would never have happened, neither in Germany, nor in Italy, nor anywhere else. Those who recognised its threat at the time and tried to stop it were, I assume, also called “a mob”. Regrettably, too many “fair-minded people” didn’t try to stop it, and, as I witnessed myself during the war, accommodated themselves with it when it took over.

People who witnessed fascism at its height are dying out, but the ideology is still there, and its apologists are working hard at a comeback. Past experience should teach us that fascism must be stopped before it takes hold again of too many minds, and becomes useful once again to some powerful interests […].

I campaigned for marriage equality in 2015. Though the outcome was that which we sought, our volunteers experienced sneers, insults, and physicial assaults – some so severe that the Gardaí investigated. I recall that during Germany’s Weimar Republic, a nascent movement for decriminalisation of homosexuality had begun. Just a few years later, these people were being sent to their deaths in concentration camps by the Nazis.

This is not a game. You who are now reading this email may not realise the real danger of proceeding with tonight’s programme and this item, including Mr Pell. However, there are many amongst your colleagues and viewers who do.

I urge you to accede to my request.

On Saturday, confirmation of Ireland’s qualification to the semi-final round of the IRB Women’s Rugby World Cup was followed by this tweet from RTÉ’s 2FM:

Full details to come later but the @IrishRugby @irbwomens #WRWC2014 Semi Final will be live on @RTE2fm on Wednesday. #COYGIG #rterugby

While increased coverage in Irish media of women’s sport is welcome, is it really satisfactory for the state broadcaster to announce radio-only coverage half-way through a major international tournament?

Could we even imagine a world where this would be the kind of coverage given to the senior men’s rugby team?

I’ll try to respond to Damien in this post, since 140 characters isn’t nearly enough.

To give credit where it is due: RTÉ News’ sport bulletins have improved over the couple of last years – to go so far as leading with reports on the women’s squad, even before the recent New Zealand win; and there has been consistent coverage and reporting of the Irish women’s rugby squad’s achievements from the likes of Damien O’Meara and Game On 2FM, RTÉ’s Michael Corcoran, Mary White of The Irish Examiner, Gavin Cummiskey of The Irish Times, Dan Sheridan and Billy Strickland of Inpho, the photojournalists of Sportsfile, and precious few other Irish journalists.

Indeed, reporters are more often than not present at fixtures and events.

The question is whether or not Irish eyes can fix on moving images of women on a playing pitch: through the medium of television. Will a report or footage end up on the cutting floor; and if a piece is published or broadcast, just what treatment will it get?

We can only judge on what has gone before, so let’s work back from this latest tournament.

END_OF_DOCUMENT_TOKEN_TO_BE_REPLACED

This morning, An Garda Síochána in Dublin closed of part of a city centre thoroughfare due to a major incident.

Not long afterwards, well-known Irish journalists, blogs, publications and broadcasters were on the story. They, too, posted comments and images of the incident on social media, as well as on their own websites.

Shortly after that, several members of the public (including me) posted comments, as well as replies, on Twitter to draw attention to the Samaritans Media Guidelines for reporting on such incidents.

To their credit, some individuals and blogs removed their tweets and content from their websites. To their shame, the established media organisations did not; instead, they continued to update their social media accounts and online reports with live updates, photos, videos, embedded tweets, and so on. (To date, many of these remain available to view.) 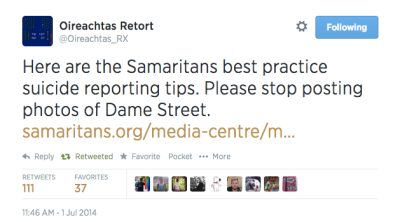 The problems with the reporting on today’s incident